Graffiti is not a new phenomenon in the United States. At one point, New York City’s subway system was a hot spot for large amounts of vandalism on trains, pillars, and walls. After a five year initiative beginning in 1984 to clean up graffiti around the city, the culture began to die out as security was increased and the act began to be considered a criminal offense. Today, most graffiti found in the city are tags left by gang members, parkour enthusiasts, and ordinary people with a sharpie or can of spray paint on hand.

Traditionally, graffiti is done on open spaces to clearly show off the “artists” work in the best possible manner. A white wall is always ideal, but any space can do. Before the 1980s, graffiti was done on the exteriors and interiors of trains; that way, the artwork was on the move wherever the train went. This mentality transitioned into today as people place full scale artworks and tags on delivery trucks and large vans. Because paint jobs are expensive to do, many of these trucks are forced to drive through the city showing off beautiful pictures or disgusting markings without a culprit to blame.

Not all graffiti is illegal, however. Many establishments in “low income neighborhoods” enjoy graffiti and see it as a type of advertisement opportunity. Whether people enjoy it or not, a picture or marking on the side of a building can catch your attention. If the vibrant characters in the artwork relates to what the establishment is offering, it adds to the atmosphere of the company. Here is a picture of Kennedy’s in the South Bronx located next to a laundry mat. While the laundry mat has stood the test of time, the fast food spot has gone through many different owners and re-branding. The artwork of the chef is a work leftover from years of business.

And it isn’t just the hood that loves graffiti. Because it used to be a staple part of the Bronx’s culture, graffiti has coincided with the New York Yankees brand. When people look at the different sides of the Grand Concourse, they are quick to scream “gentrification.” While it is true that gentrification is sweeping through the South Bronx at a very fast pace, certain traditions have just been adapted to fit in with the changes, rather than being completely deleted. Bars and restaurants around Yankee Stadium have hired artists to create works that commemorate legendary Yankees players like “Yogi” Berra and Elton Howard – the first African American to join the team. 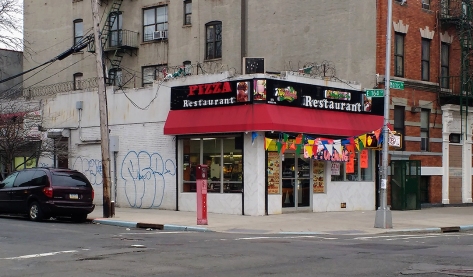 Whether you believe graffiti is artwork or vandalism is a matter of opinion. According to police officers in the city, you must call 311 for information about acquiring a permit to do graffiti on a building. This pizzeria on Morris Avenue in the South Bronx has changed hands many times since the 2008 recession. Originally known as “Unicorns,” the side wall had my favorite piece of artwork that I saw everyday growing up.

The picture showed a mountain range with a giant Coca-Cola bottle pouring soda down the path in the background. As the soda came closer to the foreground, it turns into a sea of people from different cultures. At the very front was a row of detailed characters, with distinct faces, all wearing different clothes, and representing a variety of races.

By 2007, the image began to fade and other graffiti “artists” decided to add their own tags over the image. In 2008, when “Andy’s Pizza” took over the building, they repainted the entire exterior white. If there is one thing I know about graffiti “artists” in the hood, it’s that they can not resist white walls. Shortly after the repainting, people would come by and add a tag to the wall. Every now and then, the wall is repainted white and someone else comes along to add another tag over the spot that a memorable piece of artwork used to stand.